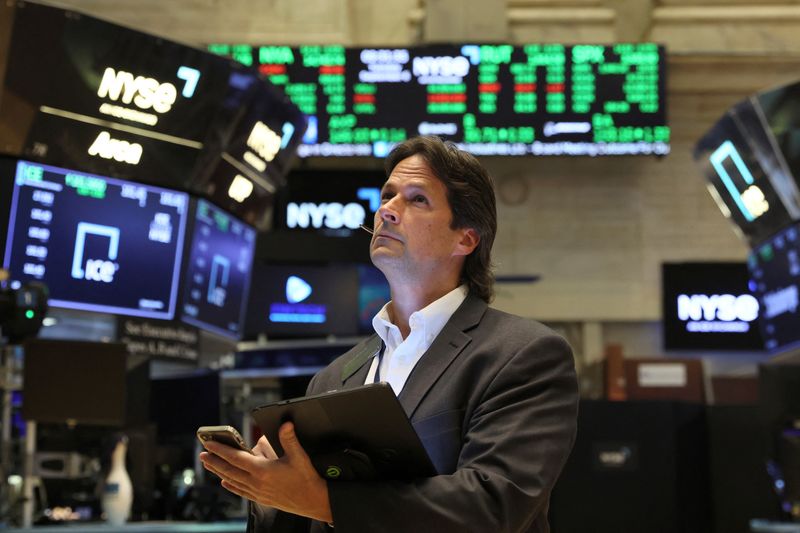 Wall Street's main indexes made cautious gains on Wednesday, with growth stocks in the lead as bond yields eased after a recent rally.
The technology-heavy Nasdaq led gains among the main indexes after a seven-session losing streak that was its first since November 2016.
The equities selloff, sparked in August by hawkish comments from Fed Chair Jerome Powell, has continued in recent days amid signs of an economic slowdown in Europe and China as well as actions by major central banks determined to stamp out inflation.
However, data this month highlighted strength in U.S. economy, prompting traders to place bets on a 75 basis point interest rate hike by the Fed later in September. Fed fund futures implied investors were pricing in over an 80% chance of such a move.
The 10-year Treasury yield slipped after hitting fresh June highs earlier in the session, boosting shares of rate-sensitive stocks such as Tesla (NASDAQ:TSLA) Inc and Microsoft Corp (NASDAQ:MSFT). [US/]
"I would expect markets to be very volatile ... it's going to be a matter of what we hear from various central bankers this week and some of the incoming economic data," said Shawn Cruz, head of trading strategist at TD Ameritrade in Chicago, Illinois.
"Unless we get a sense that things are going to get dramatically worse on the economic front, you should probably expect 3,900 to be a little bit of a floor for the S&P 500."
The S&P 500 has shed over 9% from its August peak and is trading less than 7% away from its mid-June trough when it made the year's low.
Powell's speech on Thursday as well U.S. consumer price data next week will be parsed for clues on the path of monetary policy.
At 10:12 a.m. ET, the Dow Jones Industrial Average was up 52.98 points, or 0.17%, at 31,198.28, the S&P 500 was up 8.02 points, or 0.21%, at 3,916.21, and the Nasdaq Composite was up 39.18 points, or 0.34%, at 11,584.09.
Nine of the 11 major S&P sectors were trading higher. The energy index fell 2.2% as oil prices tumbled almost 4% on demand worries related to looming recession risks. Brent crude fell below $90 a barrel. [O/R]
Apple Inc (NASDAQ:AAPL) edged up 0.1% ahead of the unveiling of its new range of iPhone models and Apple Watches.
Nio (NYSE:NIO) Inc fell 1.7% after the Chinese electric vehicle maker reported a bigger second-quarter adjusted net loss, compared with a year earlier.
Coupa Software (NASDAQ:COUP) Inc jumped 11.8% after the payment management software firm beat second-quarter estimates for revenue and profit.
Meanwhile, Walmart (NYSE:WMT) Inc, Target Corp (NYSE:TGT) and McDonald's Corp (NYSE:MCD) were among retailers that announced bond offerings in a busy post-Labor Day session.
Advancing issues outnumbered decliners by a 1.21-to-1 ratio on the NYSE and 1.41-to-1 ratio on the Nasdaq.
The S&P index recorded two new 52-week highs and 15 new lows, while the Nasdaq recorded six new highs and 137 new lows.